This tickled me too much not to post; my newest sketchpad/notebook, purchased in a stationary store in the lonesome city of Taebaek, South Korea. 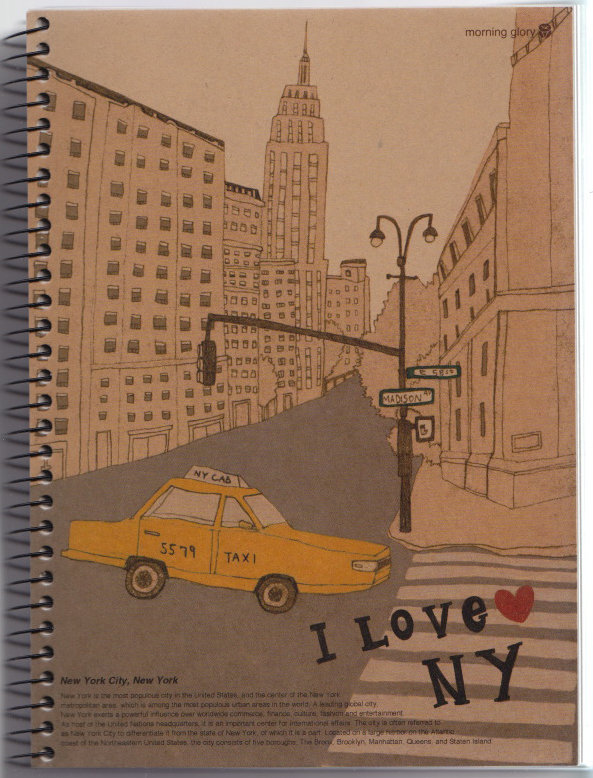 Aside from the joy I got in finding this bit of NYC-love in my little town across the world, and how much I love the inaccurate rendering/location of a certain famous building, my absolute favorite aspect of this notebook is the block of text at the bottom of the page, which since it's a little hard to read in the photo I'll re-paste here:
New York is the most populous city in the United States, and the center of the New York metropolitan area, which is one of the most populous metropolitan areas in the world. A leading global city, New York exerts a powerful influence over global commerce, finance, media, culture, art, fashion, research, education, and entertainment. As host of the United Nations Headquarters, it is also an important center for international affairs. The city is often referred to as New York City to distinguish it from the state of New York, of which it is a part. Located on a large natural harbor on the Atlantic coast of the Northeastern United States, the city consists of five boroughs: The Bronx, Brooklyn, Manhattan, Queens, and Staten Island.
The remarkable grammatical soundness/accuracy of this paragraph (not common in Korean products), and it's encyclopedia-like tone led me to suspect what I can now confirm is true: that this paragraph was stolen wholesale from the Wikipedia article on "New York City".